Paul Clemens, “Made In Detroit: A South of Eight Mile Memoir” 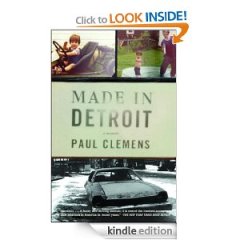 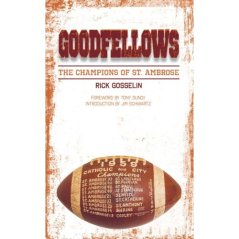 [Introductory note: This commentary splices together two pieces I wrote in 2006 and 2009. My college friend Tom Fagan gave me Paul Clemens’ book in 2006. Although now comfortably ensconced in sunny Hawaii, Tom grew up in East Lansing, Michigan, in the shadow of Michigan State University. Among his claims to fame, as a boy Tom caddied for legendary Michigan State football coach Hugh “Duffy” Dougherty, who lurks in the background throughout Rick Goesslin’s book. In 2009, my high school friend Paul Rentenbach pointed me to Goesslin’s book. Paul and his lovely wife Jackie are among a very few of my high school friends who have remained in the Detroit area, living today little more than one block from the house where my parents lived from 1955 to 1998.]

My heart may be in Paris but, as my friends know, my psyche will always be in Detroit, Michigan, once proudly known as the Motor Capital of the World. Detroit is where I was raised in my most formative years. Although I have lived well over half my life in other locations, the Motor City remains the frame of reference by which I see the world. Or, to qualify that, the Motor City of the ‘50s and ‘60s remains my frame of reference. That is not the Detroit of today.

Detroit now epitomizes urban rust belt decay, with block after block of abandoned buildings and gutted houses. Its current population is less than half what it was in 1950, when it ranked fifth in the United States, and 19th worldwide; and it now has the highest poverty rate of any major city in the United States. The reasons for Detroit’s demise are endlessly debated, the stuff of Ph.D theses and think tank policy papers.

I place particular emphasis upon the severe 1967 race riots in Detroit, which accelerated white flight to the suburbs; and, in a city synonymous with the American automobile industry, a lack of foresight on the part of the “Big 3,” GM, Chrysler and Ford, along with their union counterpart, the United Auto Workers – big business and big labor. Over the course of several decades, the Big 3, with the acquiescence of the UAW, ceded their preeminent place in the world market to more competitive Japanese and European companies. The city of Detroit, but also its suburbs and the entire region, suffered from the slow stagnation of the American automobile industry. These two books are about two very different cities bearing the same name. Rick Goesslin describes the Detroit before the ’67 riots. Paul Clemens treats the city more people are familiar with today.

Goesslin’s book centers on the football fortunes in the 1950s and 1960s of a small Catholic school, St. Ambrose, located in one of Detroit’s most affluent suburbs, Grosse Pointe, but just the other side of the border with Detroit. Even people familiar with Michigan and Detroit are not always aware that Grosse Pointe contains a few blue collar pockets, with small houses built closely together, frequently designed to house two or more families; houses headed by autoworkers, police officers and firemen, not auto executives, doctors and lawyers. St. Ambrose was located in one such pocket, and, up to my 10th year, my family lived about three blocks away, in the same blue-collar pocket.

Indeed, Goesslin’s book starts in 1956 at 1358 Maryland, a mere half-block away from where we had lived, at 1314 Maryland, before moving the previous year to a leafier Grosse Pointe street about ten blocks away. Little did I then know that living down the block was one Tom Boisture, who was about to be offered the head coaching job at St. Ambrose. Boisture took the job at St. Ambrose, then went on to coaching positions at Michigan State and in the NFL. Had I known that a future Michigan State and NFL coach was living a mere half block away, I’m sure I would not have let my parents move. Goesslin recounts how first Boisture, then George Perles, another Michigan State and NFL coach, turned this tiny parochial school into an unlikely high school football powerhouse.

The St. Ambrose Cavaliers’ finest moment came in 1959, when they bested Detroit Cooley, a school close to 10 times bigger, in the 1959 “Goodfellows” game, an annual match between Detroit’s public and Catholic school champions at what was then known as Briggs Stadium – later Tiger Stadium and now nothing more than an forlorn field on Michigan Avenue on Detroit’s near West Side. The 1959 Goodfellows game is the centerpiece of Gosselin’s book. But the Cavaliers continued to dominate Detroit high school football for the better part of a decade. They went on to win four more Goodfellow games, enjoyed four more undefeated seasons, and posted a 64-8-3 record in the period 1959 to 1967.

St. Ambrose was so small that it had no field of its own, and consequently the Cavaliers practiced at nearby Defer Elementary School, the school I attended from kindergarten through 6th grade. While in elementary school, I remember watching in awe as the team scrimmaged. My most vivid memories, however, came during practice breaks, when the players removed their helmets and headed to the water fountain. I could then see them up close, with sweat pouring down their faces. This was prior to Boisture’s arrival, when a man named John Thursby was Cavalier coach. I can still hear Thursby barking at his players during practice sessions (Thursby would go on to become basketball coach at my public high school).

1967 marked the high water point for the Cavaliers. The program fell apart quickly thereafter, and in 1972 the Archdiocese of Detroit closed the school, which was demolished a decade later. Gosselin’s job is not to explain the demise of either St. Ambrose or Detroit, although he does mention that racial unrest generally and the 1967 riots specifically prompted an exodus from Detroit that would “empty out many parishes” (p.233). In addition, Gosselin attributes St. Ambrose’s demise – and by extension, that of Catholic Detroit – to 1960s thinking, where parochial education became an “outmoded idea” and the wave of the future was to “train Catholics and Christians in a more secular way rather than in a more enclosed environment like a parochial school,” quoting a St. Ambrose priest of that era, Father Timothy Pelc. Joe Carruthers, the last St. Ambrose coach to lead the Cavaliers to a championship, noted that the Age of Aquarius arrived at St. Ambrose after the 1967 season. “[A]ll discipline seemed to be breaking down,” Carruthers said ruefully. “The flower children were coming in and changing the whole neighborhood” (p.233).

Clemens’ story picks up at about the point where Goesslin ends. He recounts the decline of his once tightly knit working class neighborhood on the East Side of Detroit, as more and more white families – the Clemens family excepted — moved from his neighborhood to the north side of Eight Mile Road, the boundary between Detroit and its suburbs, to be replaced by African-Americans. Although Clemens expounds at length on the virtues and disadvantages of his Catholic education, I was frustrated that he never reveals which high school he attended, leaving me guessing throughout. Part of my informal education growing up was learning at least a bit about the many Catholic schools which held Detroit’s neighborhoods together. By Clemens’ time (he was born in 1973), many of these institutions, like St. Ambrose, had closed, replaced by a few mega-schools. Since the book is not likely to have much appeal to persons not already somewhat familiar with the territory, I was curious why Clemens hid from his readers what I consider a key fact about him.

Clemens seems to despise my community, Grosse Pointe, with the same fervor that many of his neighbors despised blacks. But the Grosse Pointe he describes was totally unfamiliar to me, an endless series of debutante balls, yachts and horse shows. When I was growing up in Grosse Pointe (which, ironically, is located almost entirely south of Eight Mile Road, like Clements’s enclave), my principal preoccupations, and those of my friends, were beating rival high schools Dearborn Fordson and Royal Oak Dondero in football, and Highland Park and Austin in basketball. The latter was a nearby Catholic boys school which basketbabll great Dave DeBusschere attended; it was razed many years ago to make way for a used car lot.

Although Clemens and his immediate family seem immune to the anti-black racism that touched so many of his neighbors, he describes Coleman Young, the African-American mayor of Detroit from 1973 to 1993, in terms that sound like those of an African-American who grew up in Alabama in the ‘50s and ‘60s talking about Bull Connor. Clements argues that Young did just about everything he could to encourage white flight from Detroit’s working class neighborhoods, while cozying up to the elites rebuilding downtown with Renaissance Centers.  White flight would have happened without Young and the policies he followed but, Clemens suggests, it might not have been so precipitous.

In the latter portions of Clemens’ book, he abandons chronology and skips from his unnamed high school to post-college and back again. Much of the second half consists of digressions into literature, with discussions of Faulkner, Baldwin, Ellison and others. These discussions added little to the book. Nonetheless, I enjoyed reading Clemens’ account of how familiar territory was changing rapidly in the 1980s in a way I could only see from a distance.

Gosselin’s book, by contrast, was nearly 100% close-to-home nostalgia for me. Anyone under 40 is unlikely to recognize the Detroit which Gosselin describes, a vibrant patchwork of tightly-knit neighborhoods, more often than not held together by parish schools. It pains me to say that this Detroit has disappeared forever.